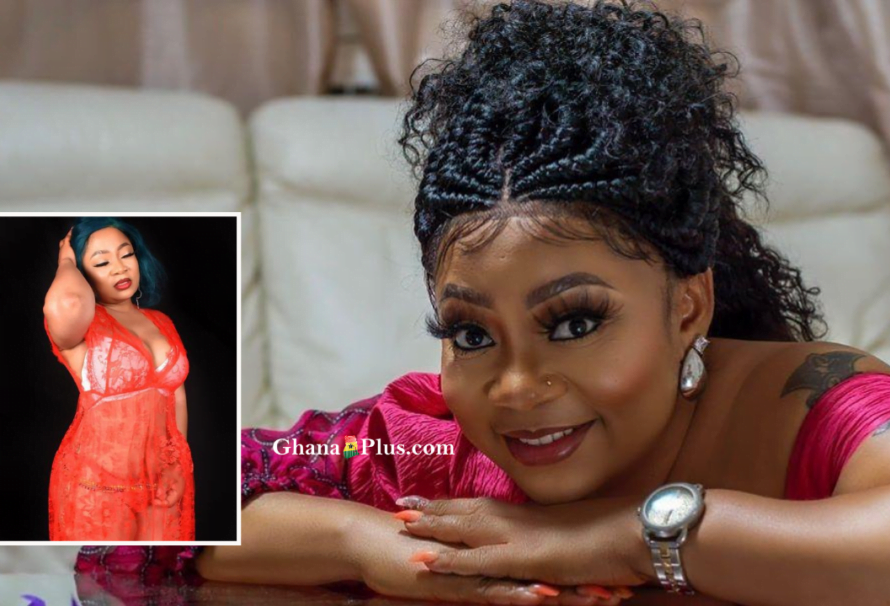 Ghanaian Actress Vicky Zugah has found herself on the wrong side of Ghanaian over a semi-nude photo of herself she shared on her Instagram page last night.

The photo believed to be part of an advertisement to promote her new show “RED LIGHT SHOW” to be aired of UTV Ghana soon did not go down well with her followers as they descend heavily on her to condemn it.

The RED LIGHT SHOW, a message accompanying it indicates that it would be a late night and adult-focused show with 18 years of viewer classification.

The show is expected to discuss uncensored adult s*xual, marital, and relationship-focused issues.

“Who is ready for an adult show on @utvghana 😉. The RED LIGHT SHOW is here!!!
We go raw and straight with this one. Put the kids to sleep before 11 pm and let’s talk about s*x 😋” #RedLightShow #Utv #R18, #TGBTG #ThankGodManIsntGod the message reads.

In the photo shared by the actress to promote the show, the actress wore a see-through red nightgown exposing her semi nakedness to the world.

In the s*xually induced photo, Vicky Zugah showed her beads and underpants causing uproar among some of the funs.

This is how some fans reacted to the photo

“I didn’t expect dis from you at all. I’m very disappointed”, one wrote

“Shameful. Voltariens are not like this pls, another said”.

“We should weep as a nation… Rather than supporting such nuisance.” One fun wrote.

“When they are being stupid you say hot. Which advice we should give a children one day one dey. They are all not matured. You do all those things and after that you disturb God to give you a good Man. Ask yourself you deserve a good man with this shitt”, a fun who goes by the name m_achee said.

“I swear this lady went to get house at EAST LAGON eiii 3twa for business paaa disaster celebrities 🤣🤣🤣” ikabaakwame wrote.

Who is ready for an adult show on @utvghana 😉. The RED LIGHT SHOW is here!!! We go raw and straight with this one. Put the kids to sleep before 11pm and let’s talk about sex 😋 #RedLightShow #Utv #R18 #TGBTG #ThankGodManIsntGod!!!