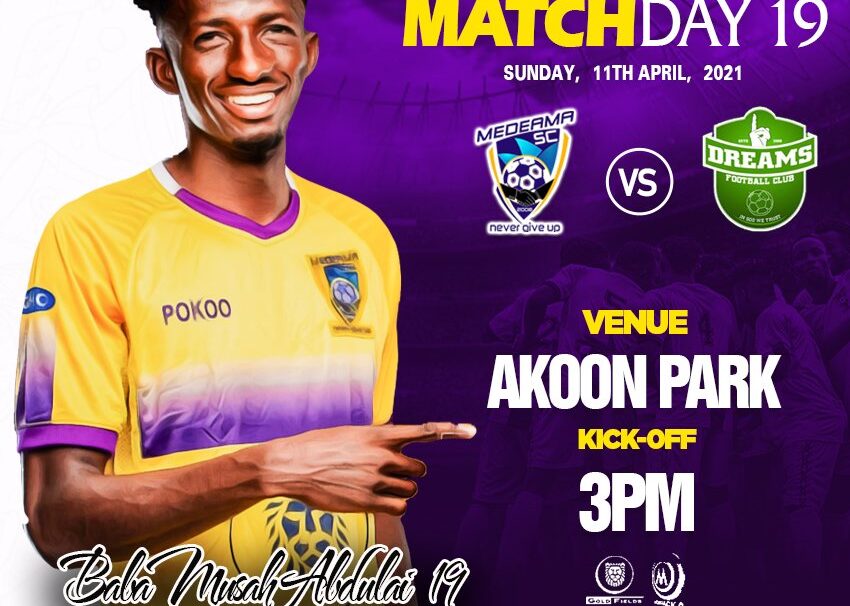 This GPL Match Week 19 fixture presents an opportunity for both sides to get back on track in their title pursuit after recording disappointing results the previous match week.

Medeama come into this game on the back of a hurting away defeat to current league leaders Great Olympics.

The Mauves and Yellow are unbeaten at home this campaign, winning 6 and drawing 3 of their 9 matches played. They have recorded 5 straight wins at home with the last 3 happening with clean sheets.

Medeama SC, currently on 27 points and occupying the 6th spot on the league log will traget climbing into the Top 4 with a win today, following Hearts of Oak’s defeat to AshantiGold on Saturday.

They face Dreams FC, who failed to make it count last week at home when they surprisingly drew with relegation battling Inter Allies.

The Still Believe could only manage a 1-1 draw and will need to fetch a point in Sunday’s encounter to keep alive their title aspirations.

After an impressive run of 8 games without defeat, Dreams FC have stuttered in their last 4 games, winning just once while losing 2.

That means they’ve picked just 4 points from the last 12 available and certainly Coach Vladislav Viric will need to find a way to halt this recent patchy form.

Against, Medeama, Dreams FC face an opponent they’ve struggled against on the road. In 2 away games, the Still Believe have been beaten, and they will need to do more to get something out of this game.

To stand a chance of also entering the Top 4, Dreams need to do the unthinkable by inflicting on Medeama their first home defeat of the season, which will also be their first away win at Tarkwa against their opponent.

The Match takes places at the Akoon Park, on Sunday at 3pm GMT.

Medeama SC have scored in all but one of all home games played this season.

The only time they failed to score at home was against Liberty Professionals in December when they drew goalless.

Only two of Medeama’s 9 home matches have seen more than two goals.

Aside Asante Kotoko, Medeama has the league’s best home defensive record. They have conceded 4 goals, 1 more than the Porcupine Warriors. Other sides to have condeded 4 goals at home are Berekum Chelsea and Great Olympics.

Only 7 of Dreams FC 27 goals scored overall this season have come in Away Games (8 Matches).

Dreams have only won 1 away game so far this season, a 2 nil win against Eleven Wonders.

Their overall Away record stands at 1 win, 4 draws and 3 Defeats in 8 games.

Only two of Dreams’ away games have ended with them not conceding.