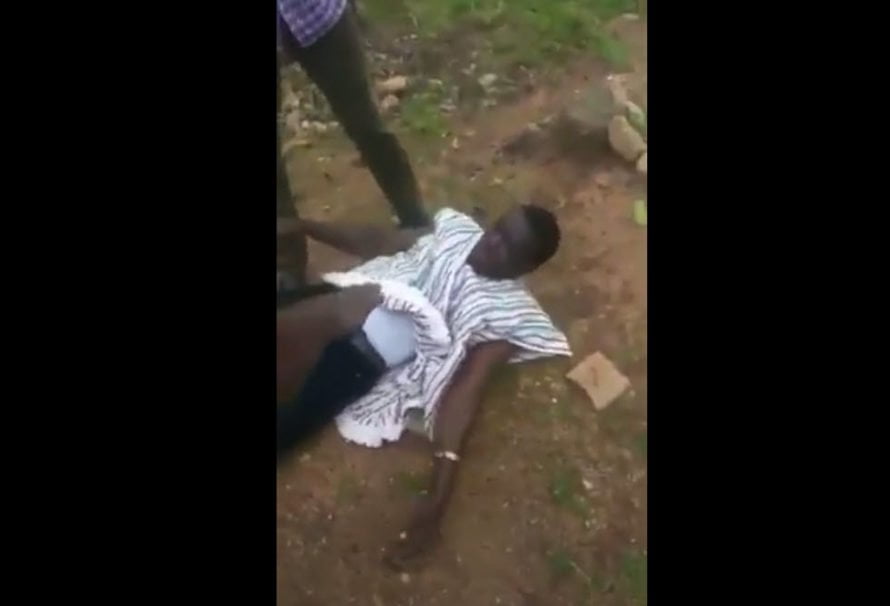 Man Stripped naked for having an affair with a married woman

Ghana may never win the fight against mob justice as another video has immerged on the internet a few days after the country lost a 90-year-old woman to the act.

The new video available to GhanaPlus.com shows a young man severely beaten and stripped n*ked for having an affair with a married woman allegedly in the Savannah Region of Ghana.

The young man whose identity is yet to be known and believed to be in his 30s was brutally assaulted and subsequently, stripped in broad daylight for allegedly having an affair with another man’s wife.

In the video, the lovers who seemed to have been ambushed by the husband of the woman and his friends at a residence where their escapades took place were subjected to a severe beating for their actions.

The woman was the first to have suffered some beaten in the hands of a man believed to her husband.

She was thrown on the floor, kick and slapped by the supposed husband while three other men carried the man out of the room to an open space amidst some slaps on the face.

The man was beaten to a pulp by the three

He was slapped on the face, hit on the head, face, and other parts of the body with legs whiles still in shoes.

The three were later joined by the supposed husband of the woman who, in a dialect suspected to be the Hausa language, instructed that the man’s panties be removed so they can have a look at his manhood.

READ ALSO:  Indeed You Bring Out the Best in Me, Uncle Ebo Whyte Tells Wife on 37th Marriage Anniversary

Bit by bit, all cloths, covering the n*kedness of the neatly dressed man were removed leaving him naked on the floor with only his upper body covered with his singlet.

Amidst plea for forgiveness, the young man was kicked on the private part, head, dragged on the butt, and whipped mercilessly by two of the men while some members of the community at a few distances away from the scene looked on.

Video of the incident below:

DISCLAIMER: GhanaPlus.com is in no way responsible for opinions or comments expressed on our website by contributors. Should you have any complain about a story published on this website, please Contact us
Video