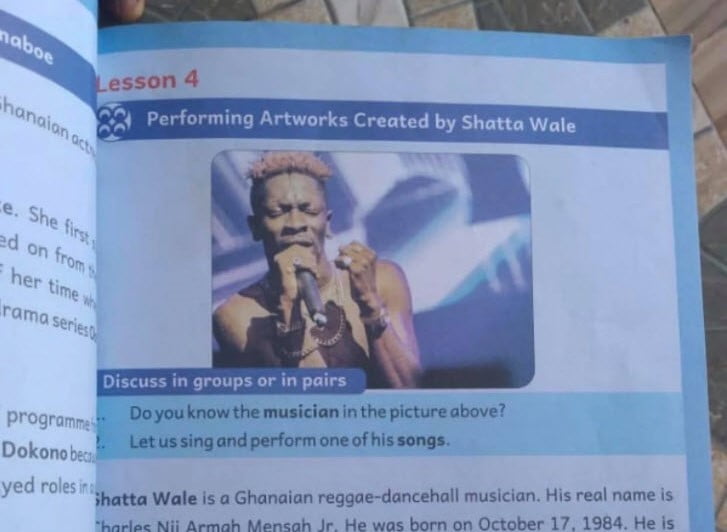 Ghanaian dancehall artiste Shatta Wale has been featured in the Ghana Education Service approved creative art test book for primary four (4) pupils at the basic level schools in the country.

The textbook, Creative Art Textbook 4, published by the Alpha and Omega Series featured the “My Level” hitmaker in page 61 of the subject which aims to introduce young pupils to art education, a critical component of national development while giving them the opportunity to identify their creative abilities for development.

The lesson under the title “Performing Art Created by Shatta Wale” gives a brief history of the controversial artiste, his musical transition from Bandana to Shatta Wale as well as a collection of his music.

The topic also quizzed the pupils to sing and dance to anyone of the artiste popular songs.

Shatta Wale not first to be studied in Schools

Although the report indicates that the artiste is the first to be featured in GES approved textbooks, checks has disclosed that he was not the first.

Others like Kakaiku, Kojo Antwi, Osibisa, Nat Brew, Lord Kenya, Kuami Eugene, etc had been featured in previous books for study by pupils in basic 4, 5, and 6 pupils.

The news of the artiste feature in the educational curriculum has been received with missed feeling.

While others welcomed the news praising the artiste of being well deserving of feature others were of the view that, there was a better musician who should have been featured.

Another section of the public also believed that the GES should take a second look at what the Ghanaian children were fed with describing the feature as trash.

Some comment chance upon by GhanaPlus.com had this to say about the textbook:

“Shatta deserves it, looking at the journey of Shatta he is a whole story to be discussed and a symbol of never give up, from Bandana to Lion king, #salute shatta” a Facebook user wrote.

“Learning someone. history what will. you gain. we have study people. Biography aaaaaa nothing better. instead of introducing technical n vocational subject compulsory look at this mess u are creating” another with the name Kamal Tintin

William Egyir has this to say, “Our education system is the poorest in the world, we only learn trash, they will soon ask final year students to draw him, such a trash”.