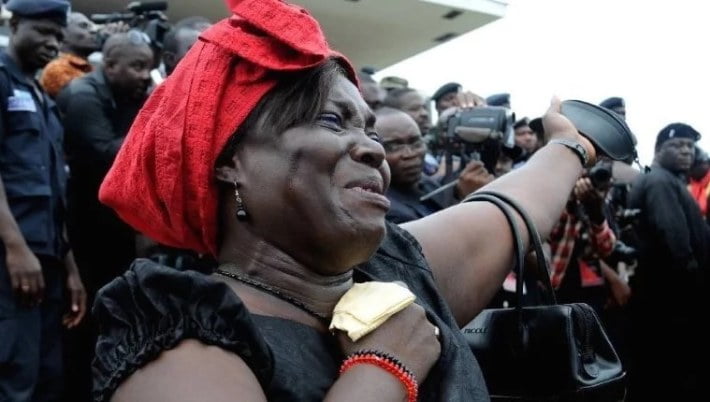 The 90-year-old woman lynched over allegations of witchcraft at Kafaba in East Gonja Municipality of the Savannah Region of Ghana has been laid to rest.

TV3 News report, yesterday, July 25, that tears flowed at the burial ceremony held in honour of the old woman who died a painful death in the hands of her own people.

Scores of mourners clad in black attire wailed uncontrollably at the ceremony.

According to the report, the body of the woman who was identified as Akua Denteh was released to the family after an autopsy was conducted on her at the Tamale Teaching Hospital.

On Thursday, July 23, the Ghanaian media was greeted with a sad report of a 90-year-old woman who was beaten to death over allegations of witchcraft.

The gray-headed woman believed to be in her 90’s was pronounced a witch by a soothsayer invited to exorcise witches in the community of Kafaba and was subsequently subjected to severe beaten to death for allegedly being spiritually responsible for lack of development in the community.

A video of the incident in the media space showed how the old woman was made to sit on the floor, slapped, hit on the head, and whipped at the back amidst cheers from some members of the community despite the plea of her innocence.

The act was carried out by two women, one of whom was believed to be the soothsayer.

The family of the old woman had earlier called for the arrest of the chief of Kafaba as they suspected his involvement in the development but the chief had since denied the allegations and pledge his support to bring perpetrated to book.

However, the police are yet to make any arrest two days after the incident.