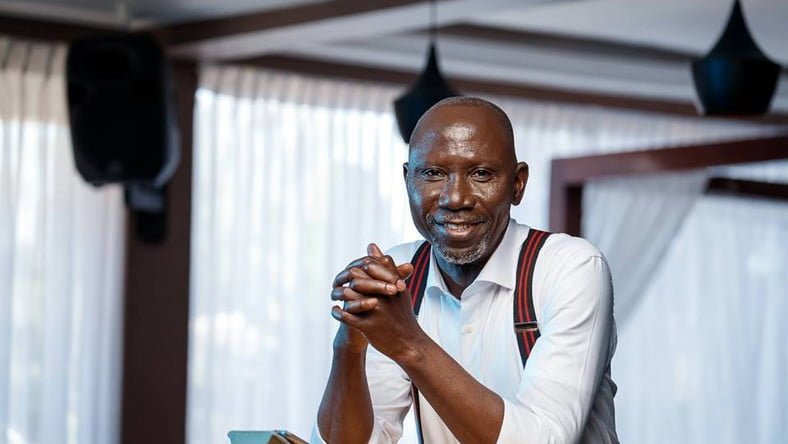 The Chief Executive Officer (CEO) of Roverman Productions, Uncle Ebo Whyte has praised his wife, Florence for creating a better version of him.

“Happy anniversary Florence. Indeed you bring out the best in me and I love you,”

The renowned playwright praised his better half of 37 years in a Facebook post to mark their 37th anniversary today.

According to him, although, their marriage did not start on the right foot due to his inability to forget his former lover, his wife’s words to him three years into their marriage changed his perspective, compelling him to become the man she needed.

“I was consumed with the “what-if” monster – What if I had married her instead of Florence? I became resentful, was gradually checking out emotionally and I shut off Florence. As a result, we had frequent arguments. One day, in the middle of one of our arguments my wife looked me in the face and said, “Ebo, you may think that you made a mistake in marrying me but I want you to know that I did not make a mistake in marrying you”.

“Her words hit me”

“Her words hit me”, the author and motivational speaker wrote.

“I was sure I had made a mistake but why was I punishing her for my mistake?

After wooing her with reasons to love and trust me, I can’t now and say all the wooing was a mistake. I remembered my wedding vows and realized that I would never be a man, worthy of trust from anyone until I lived up to the vows I made to my wife”.

“I was compelled to become the kind of husband she needed and I needed to be. She called out the best in me,” Ebo Whyte stressed.

The renowned playwright noted that in the above words, he discovered Florence’s vulnerability, which was her love and fear of losing him and that was what made him a better husband.

Uncle Ebo White used the opportunity to encourage young men and women to communicate their fear and feeling to their partners whenever they feel they were drifting away.

“So, next time you feel that you are losing your man/woman, don’t act as if you don’t care. Gather the courage to tell him/her, “My dear, I feel that I am losing you and it is killing me.”

If he/ she is a good person, they will respond to your vulnerability with decency and honor,” he said