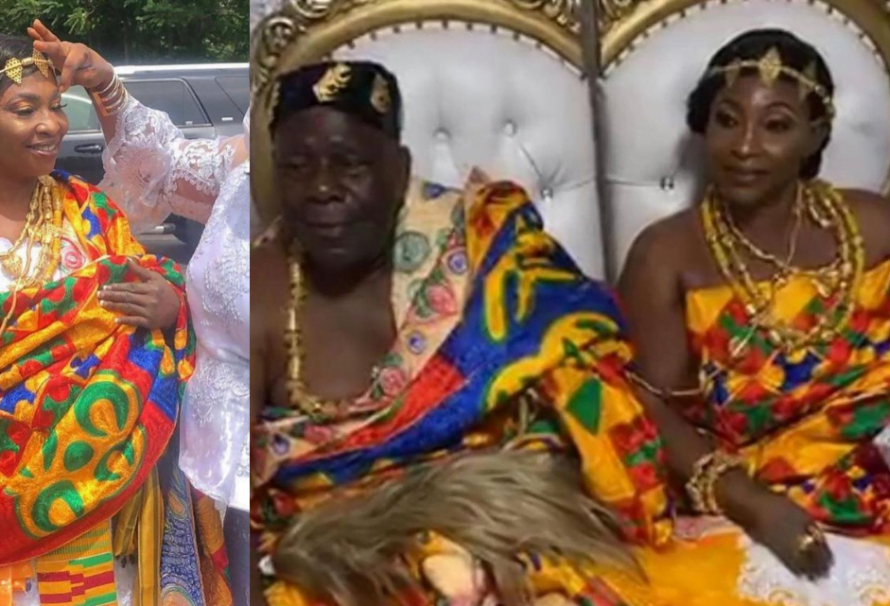 Ghanaian Actress Rose Mensah, known as Kyeiwaa in the movie circles, today held her traditional marriage ceremony in the United States of America.

The actress got married to her husband, Michael Kissi Asare, traditionally, six months after their court wedding under the laws of the United States of America (USA) in Massachusetts.

Photos of Kyeiwaa and her husband adorned in Ghana’s Kente cloth at the ceremony have since surfaced on various social media platforms with scores of congratulatory messages from her fans and colleagues actors, especially, those from Kumawood.

After Kyeiwaa’s failed marriage which only lasted barely a week in 2015, fans and colleagues are obviously excited that the actress finally found love and marriage at last.

Actress Rose Mensah, known as Kyeiwaa marries in the US

The couple would today, Saturday, July 25, 2020, hold their marriage blessing at 267 Harrington Way, Worcester MA, a city in central Massachusetts to seek God’s hand to bind them to become one flesh for better and for worse

READ ALSO:  See what Salma Mumin gifted herself on her birthday

Earlier Date for the Marriage postponed

The 57-year-old Kumawood actress and her husband had earlier set March 21 to hold their white wedding and held a bridal shower to that effect but were, however, postponed due to the Coronavirus outbreak and its subsequent ban on social gatherings in the U.S.

VIDEO: Kumawood actress Kyeiwaa marries in the US