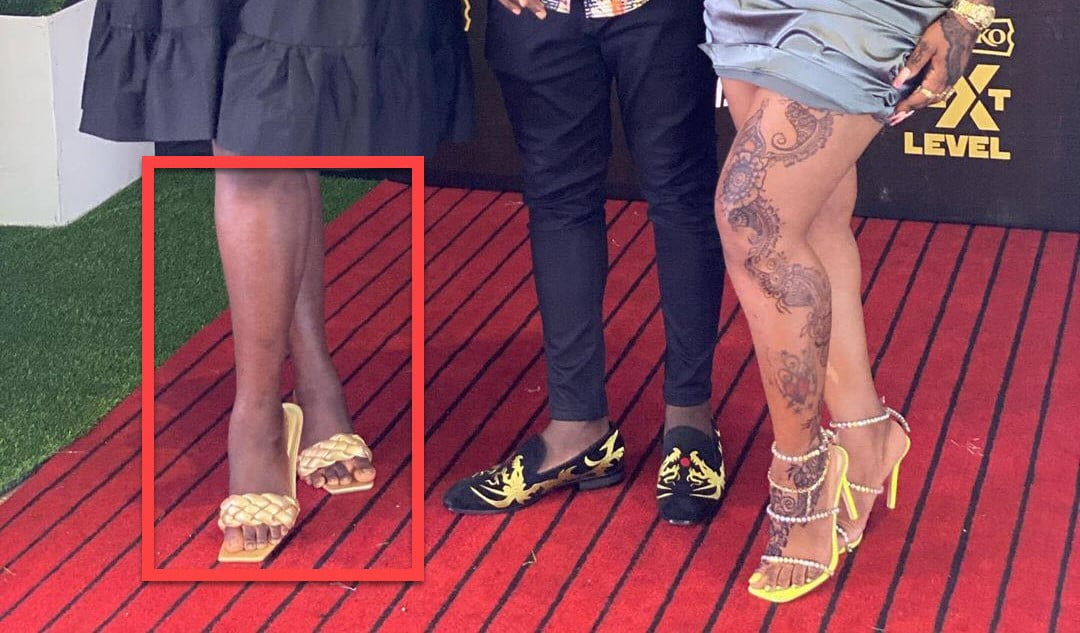 Ghanaians are not willing to let go as far as issues concerning Pinamang Cosmetics is concerned.

The cosmetics brand which was heavily trolled by Ghanaians about a week ago has come in the news again receiving similar backlash like the previous time over a photo of one of its ambassadors’ skin which has become topical since a day ago.

A post cited by the GhanaPlus.com revealed a chat from the cosmetic’s boss in Ghana with an undisclosed person quizzing if the brand ambassador Tracey Boakye was not using her product.

It is unclear what necessitated the question, but rumours has it that the person might have sent pictures of the Pinamang Cosmetics brand ambassador, Tracey Boakye untoned legs skin which was heavily trolled a day ago.

The conversation also had a response from Pinamang Ghana’s boss asking the said person to delete the company’s name now.

The post captioned “My inn is paining me ooo🤣🤣🤣 she shld remove ur company name from Tracey trending legs s3n?? 🤣 is she not an AMBASSADOR??🤣🤦♀️🤦♀️💞” has gotten Ghanaian talking, many of whom were questioning the efficacy of the highly publicized brand by Ghanaian Celebrities like Akuapem Poloo, Afia Schwarzenegger and Tracey Boakye.

GhanaPlus brings you some of the comments IG users made about the current post involving the cosmetic boss.

“Ah! Can you delete our company name. Abeg, we won’t get any so the name di3, we tag am saaaaa😂😂😂. Proud ambassador”, tinafrique_creations said

obaapaadepa_nkunim_ wrote that “Wei mpo na we should remove ur company name yi🤪 we go catch her and undress her ankasa to see how her face matches her buttocks after using ur cosmetics🤪🤪🤪🤪”.

_takyi_waa
“@vidash593 I know this account is fake from that pinamang woman..she got to know disgrace is so close to her and trying to do this..senseless woman bring proper creams..I have also used some and do you know the result I had? Rashes everywhere I can’t go out..now am using Shea butter from the North to treat it, why should we buy cream at a low price and spend much on bad [email protected]_called_celebs ask her for me”

READ ALSO:  My wife and girlfriend know each other – Odike

Sympathizers of Pinamang Cosmetics jumps to the brand’s rescue

However, another who seems to be a sympathizer of the cosmetics brand has jumped to her defence advising those who claim they did not achieve good results upon the use of the products to use appropriate channels for redress instead of lambasting the brand and it boss on social media .

This is what the sympathizer with the name vidash593 wrote:
“And which one is a fake account. If u used the cream and u have gotten bad results what are u suppose to do as a rational human being. Go to their office and report to them. U haven’t and you are on social media ranting”.

“U guys don’t understand business else u wouldn’t be here fooling. I don’t know if pinamang is a company but if it is. Then per the company Act 179. The company is an artificial human being that can sue and be sued. So if it is the company u are attacking leave the woman alone. And stop insulting her”, she added.

She also indicated that no one has reported any side effects of the products and urged them to stop tarnishing the hard earn reputation of the brand over the so-called celeb brouhaha.