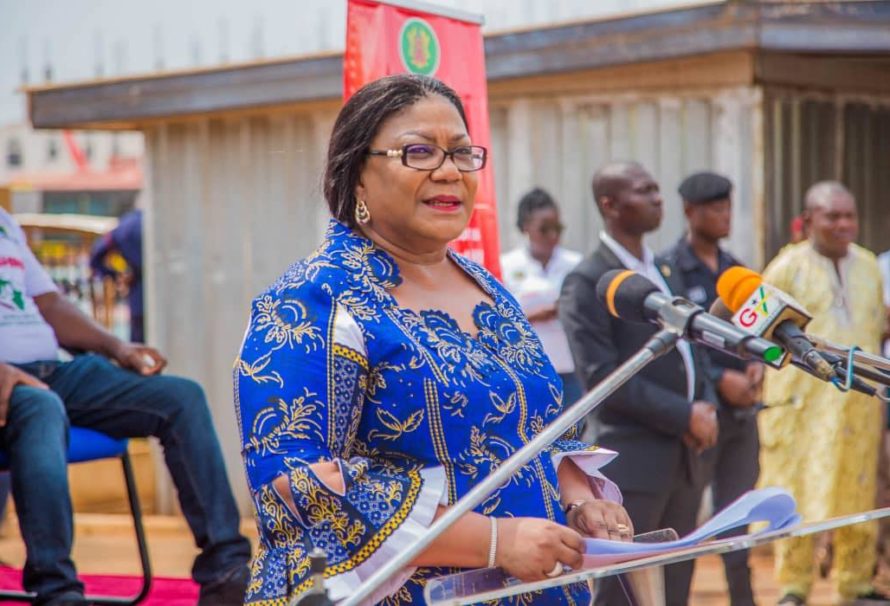 The First Lady, Mrs. Rebecca Akufo-Addo, has urged citizens in the country to retain the NPP government in power to allow it to continue its great work in developing the country.

She made this remark in a courtesy call to some traditional and market leaders in the Okaikwei North Constituency of the Greater Accra Region as well as with chiefs and opinion leaders of Achimota and Akweteman and traders at the Achimota and Lapaz markets.

The call was to provide the First Lady with accurate data on the issues and problems that constituents were facing as well as to convey them to appropriate authorities to be resolved.

Using the opportunity she appealed to them to vote massively to maintain the New Patriotic Party (NPP) in office in the upcoming general elections.

According to her, the NPP-led government had made progress in improving the livelihood of citizens and promoting socio-economic growth.

She noted that the government had, during its reign since 2016 had achieved great feats including the institution of many infrastructural projects as such they deserved another term to do more.

“The President is working hard to accomplish his promises including free SHS, the restoration of teacher trainee and nurses’ allowance, and ending of Dumsor which proved that another term was needed for the continuation of the good works for all Ghanaians,” she said.

Contribution from The Rebecca Foundation

Mrs. Rebecca Akufo-Addo also made reference to the immense contributions made by The Rebecca Foundation, with the initiation of several projects particularly focused on women and children to complement government efforts.

She revealed that numerous renovation and construction works were done in the healthcare sector, mentorship and skills training for both in and out of school girls as well as the “Learning to Read, Reading to Learn” initiative which provides libraries in selected communities to encourage the culture of reading among others, which the Foundation had executed since taking over the rein of power.

The First Lady thus urged electorates to retain the NPP in office “To Do More.”

The chiefs of Achimota, Nii Ayibonte Adams, and Akweteman Mantse, Nii Nmai Akwetey Brenya III, respectively wished the party well in the upcoming elections. And appealed to the government through the First Lady to refurbish roads in the community.

Nii Brenya particularly appealed for more footbridges to be constructed on the N1 Highway, to reduce frequent pedestrian knockdowns on that stretch.