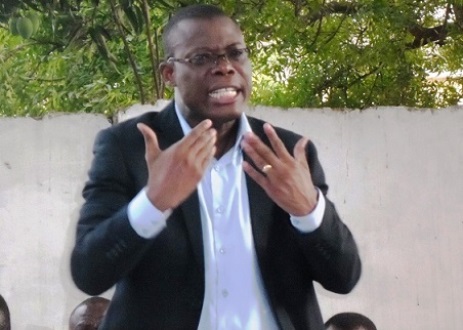 The Member of Parliament for the Ketu South Constituency, Fifi Fiavi Kwetey has dared the President of Ghana, Nana Addo Dankwa Akufo-Addo to swear by a deity in his constituency in the Volta Region if he indeed is clean of allegations of bribery leveled against him.

According to him, the President was very much aware he was corrupt, however had been hiding behind the holy Bible to perpetuate his crooked activities.

The former Propaganda Secretary of the National Democratic Congress (NDC) was speaking at Press Conference in Accra on Wednesday, December 2, 2020, concerning a video making rounds in the media in which the President was captured allegedly receiving a bribe of $40,000.

“I come from Nogokpo in the Volta Region and a few of you who know Nogokpo will know, you dare not lie, if President Akufo-Addo actually says he is a man let him come with me to Nogokpo and see whether he can lie there,” he said.

“He will not, he will not but because in the name of all this holy holy, he can swear by the bible and lie, because there is no fear but when it is that you know that you cannot escape, you will not be able to lie.

Fifi Kwetey said at Nogokpo, the President and his corrupt activities would be exposed and they would not be able to escape as they had always done.

He questioned why organizations who matter including the media were all quite over the development.

READ ALSO:  A Teacher and Five Others Identified Suspects in the Kafaba Lynched Scandal

“But this is what we have with Minster incorruptibility, Mr the Battle is the Lord, Mr. I am here to fight the public purse, Mr if you want to make money go the private sector don’t come and join the public sector” he added.

In a video circulating on various social media platforms, the President, Nana Addo Dankwa Akufo-Addo was caught on tape receiving cash wrapped in a brown envelope from a man and a woman.

The woman, report indicates was the wife of one of Ex-President John Mahama’s appointees under his administration.

The New Patriotic Party has since denied the allegations adding that the video had been doctored.