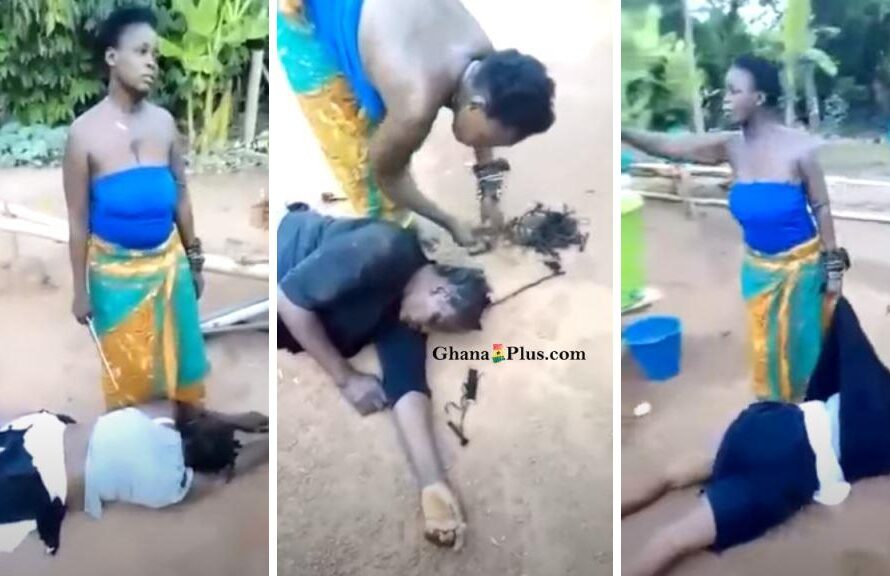 A traditional priestess at Aportoyiwa in the Ahafo Region has threatened to slay the throat of an alleged witch after stripping her almost naked of all of her clothes.

The victim, a 46-year-old Mariatu Iddrisu, a mother of five and a resident of Mim Zongo, a suburb of Goaso in the Ahafo region was brutally abused in the hands of the priestess, she sought help from to heal her epileptic condition, a disease she had been battling for past seven years.

A video sighted on 3news.com had the priestess threatening to slay the throat of the woman whose husband paid GH₵200 for her healing process but for intervention and plea from people heard in the background.

“Nana, don’t slay her throat, Nana don’t cut the down one (her dress)”, the plea from the voices of persons around at the time of the incident sai.

She also dragged her on the floor, cut off her hair with the knife, swept on her,  all on the allegations that she was responsible for her (the Priestess) son’s misfortunes.

“Bring my son’s glory, do you know me, why have you come for my son”, she spoke in Twi and another dialect.

According to her, Mariatu was responsible for her son being sacked from school among other things.

A report by 3news.com said the incident happened six (6) months ago after the family sought help from the priestess upon the recommendation of another to cure her epilepsy.

According to the victim’s husband, Iddrisu Dramani, he was charged GH₵200 for her wife to be treated, however, her wife returned home with bruises sustained from several beaten with the knife without the cure they sought after.

He revealed that his wife was accused of witchcraft after she started behaving strangely under the influence of a powder she was given to sniff by the priestess.

The incident was reported to police after nothing substantial was achieved at the Goaso Traditional Authority where it was first reported.

However, six months on, the matter is still in court.