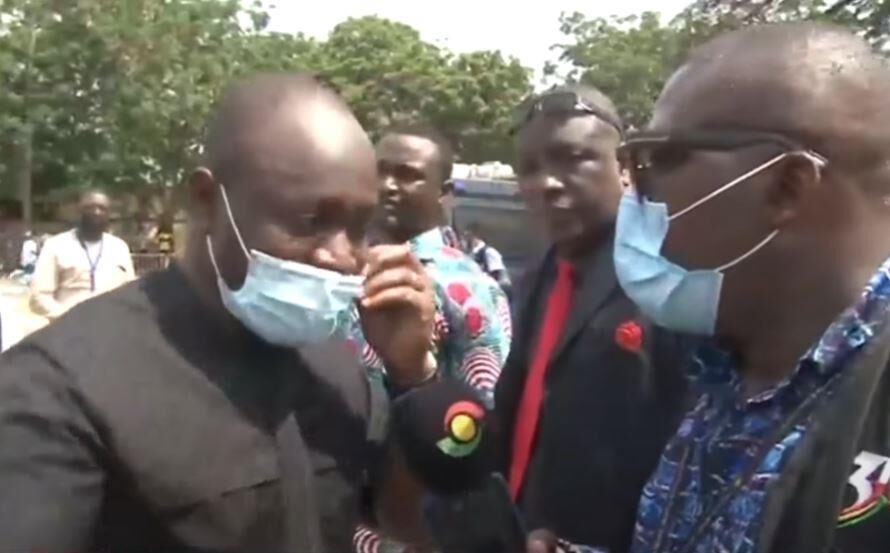 The National Democratic Congress(NDC)’s tussle with TV3, a subsidiary of Media General over the station’s 2020 elections projection might not see an end any time soon as a reporter of the station was on Tuesday, hassle for carrying out an interview with a member of the minority caucus over the development.

A senior reporter of the TV3 station, Komla Klutse who was in a live interview with the Member of Parliament(MP) for Elembele Constituency, Emmanuel Armah Kofi Buah during the minority caucus demonstration over the outcome of the December 7, elections was given no time to wrap up his discussion with the MP following constant interruptions by the MP for Borle Bamboi Constituency, Sulemana Yussif who blamed the station for the NDC’s electoral woes.

Mr. Yussif who was obviously not happy with his colleague’s interaction with the reporter from their not so favourite media house at the moment interrupted barely a minute into the interview and eventually whisked the MP, Mr Armah Kofi Buah away from the scene of the interview blaming the station for their electoral defeat.

Don’t grant an interview to TV3

“Why will you grant an interview to TV3, they are the ones who caused this problem, ignore them, don’t grant them interview,” he said.

“TV3 is TV3, TV3 is TV3, go your way, I am saying he should not speak to him, TV3 you are the cause, he said after other minority MPs present attempted to stop him from interrupting the interview.

Suhuyini apologized to the TV3 reporter over the brawl

The MP’s beef with the reporter comes barely three(3) days after the party apologized to the media over recent attacks suffered at the hands of some party leaders and supporters following the 2020 elections.

Speaking to the development, the MP for Tamale North, Alhassan Sayibu Suhuyini apologized on behalf of the minority caucus adding that the party expects the station to do the same over the wrong projections made in favour of the ruling NPP during the December 7, elections.

“We have issues with TV3 as a network but I don’t think that it can be reduced to this interview with you,” Mr Armah Kofi Buah told the reporter after the brawl.

It could be recalled that TV3, a subsidiary of Media General, during the just-ended 2020 elections projected 149 wins of the Parliamentary seat for the New Patriotic Party (NPP) and 126 for the opposition National Democratic Congress (NDC).

The NDC has since been in a brawl with the media house taken every opportunity they get to discredit the station which they have been working with for almost 23years of its existence.
Not long ago, a member of the NDC and MP –Elect of the Tamale Central Constituency, Ibrahim Mohammed Murtala said the station’s credibility had been thrown to the dogs.