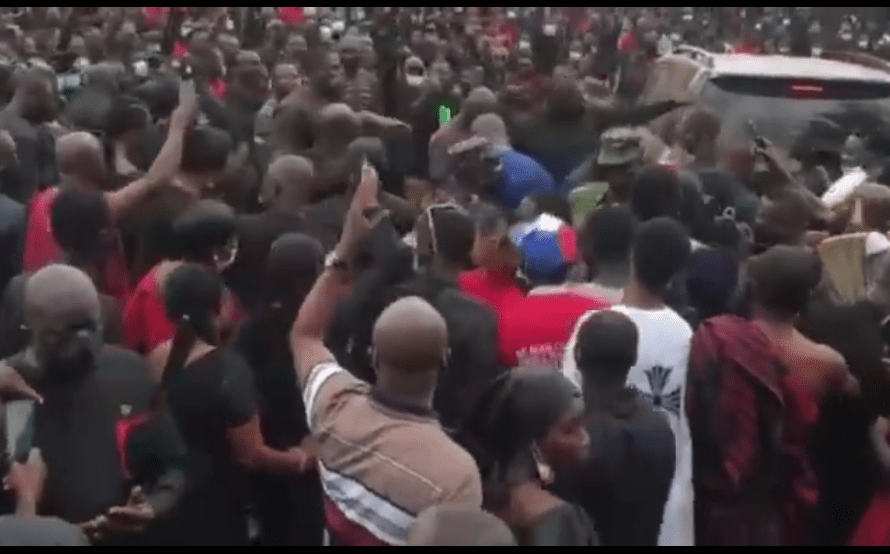 The Deputy Communication Director of the New Patriotic Party(NPP), Mr Richard Asante Yeboah has taken a swipe at critics of alleged breach of COVID-19 protocols at the funeral of the late former Secretary of party, Mr. Kwadwo Owusu Afriyie also known as Sir John.

Speaking on TV3 NewDay on Friday, June 4, he said “The picture , he painted, the gentlemen wasn’t there but he is saying that he saw pictures and he believe those pictures to have come from Sir John’s funeral and I am saying that I was there, an eye witness, I saw a different thing all together.

“I don’t think Otokunor came in with people kissing and hugging on the event floor for him to say that COVID-19 protocols were thrown to the dogs and that is what I want him to understand,” he said.

Be ashamed for organizing Sir John’s funeral in such manner, he will not be happy with you

His comment was in response to concerns raised by the Deputy National Organizer of the National Democratic Congress (NDC), Mr Edem Agbana that the funeral held in honour of the NPP politician on Thursday at Sakora Wonoo in the Ashanti Region blatantly breached the COVID-19 protocols.

Mr Agbana had indicated he personally couldn’t make it to the event but pictures and videos he had seen on social media suggest, the COVID-19 protocols were not adhere to and blamed the government and the NPP for the development.

Citing the Christ Embassy situation where they were currently facing prosecution for breaching same protocols, he mentioned on the programme monitored by GhanaPlus.com that the development create the impression that there were two different rules in the country, one for citizens and another for the government and its party faithful.

“I have watched pictures and videos of how the funeral was organized and I must say that am very very disappointed. Disappointed because few weeks or month ago, leaders of the Christ Embassy were arrested. As we speak they are currently facing prosecution because according to the law enforcement agencies they organized an event that they did not comply with COVID-19 protocols but as you speak when you look at the pictures and videos of Sir John’s funeral is appears there are two different types of laws guiding this country, that any time it had to do with politicians or the governing party they can disregard,” he said.

“I remember the funeral of our founder, they observe strictly the protocols and so it was possible to observe the protocols in the organization of Sir John’s funeral but what I saw yesterday, was very very bad, very terrible and I think that the government should advise itself that you see, we should not be seen as political leaders to be applying different rules to the citizens that when the Church is seen doing these things then it is wrong then we want to persecute them but when it has to do with politicians or government then it is ok,” he said.

“I think that even Sir John himself will not be happy seeing how, President Akufo Addo and his governments have blatantly disregarded the COVID-19 protocols in the organization of his funeral, especially, as we are told that he died of COVID.  So I think that the government should be ashamed on how they led that particular organization without complying to the COVID-19 protocols,” he added.

Reacting to the comment, Mr Asante Yeboah said he was personally there and there was no such breach of the COVID-19 protocols at the funeral ground.

He indicated members of the NDC, including the Deputy General Secretary of the NDC, Peter Boamah Otokunor were present and did not see any of them breach the protocols either.

He, however,  noted there could have been some infractions elsewhere other the funeral ground which he might not be aware of.

“Sir John’s funeral was organized under the sun, an open space where in terms of the arrangement of the chairs and everything you saw that protocols were literally taken into consideration so I didn’t not know the kind of pictures that he has seen, because I was at the event, I did not see some of the things that he had talked about, it is possible that something might have happened somewhere that was captured and I did not see,” he said.