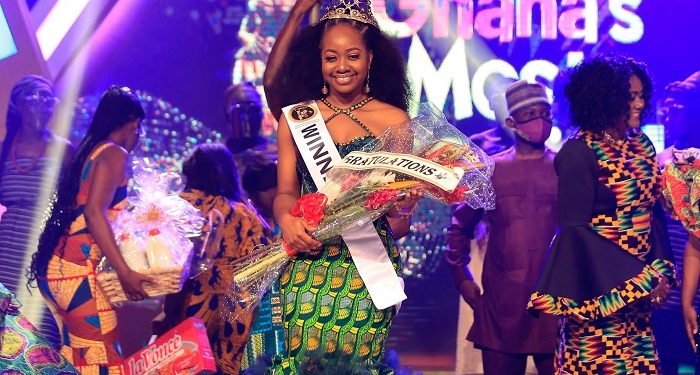 Greater Accra region’s representative in this year’s Ghana Most beautiful pageant, Clarissa Naa Dedei Botchwey has been adjudged the winner of the 2020 GMB.

Her win makes it the second, the region that hosts the seat of government has won the crown since the inception of the reality television program in 2007.

With her delightful performance on the night on all topics which were up for discussion on the grand finale, the eloquent and confident Clarissa Naa Dedei Botchwey, a product of Ghana’s premier Journalism Institution, Ghana Institute of Journalism, made a bold and impressive statement, making her deserving of the crown.

The Central University’s Alumni became the 14th bearer of the prestigious crown after beating her competitors, Abena, Zuzu, Kafui, Talata, and Afriyie from the Ahafo, Northern, Volta, Upper East, and Central Region respectively.

For her prize as the winner of the “Uniquely Ghanaian, Exceptionally African” themed  2020 GMB, Naa takes home the coveted crown, a brand new car, GH¢10,000 cash prize to support her project on Education as well as a one year supply of wardrobe by sponsors.

Naa Dedei Botchwey, together with the runner ups would also embark on a fun trip to the posh United Arab Emirate, Dubai.

Ghana’s Most Beautiful pageant was introduced by Media General TV3 in 2007 to educate Ghanaians and the world about the country’s rich culture for the purpose of promoting development through culture and unity.

With its initial tagline “Redefining Beauty to Promote National Unity”, the reality show has become the most watch among all the pageant in the country, receiving a massive endorsement from all including traditional leaders across Ghana.

The pageant, which began with ten regions of the country, was first won by the Central Region’s Ama and has seen winners from the Eastern, Northern, Western,  Upper East, Volta, Ashanti, and the Greater Accra Regions.

Currently, the pageant is represented by sixteen regions due to the creation of six new regions by the Nana Addo Dankwa Akufo-Addo government.